Especially for those depositors whose "Christmas mood" deposits are coming to end, Piraeus Bank offers the improved conditions for funds reallocating - deposit "Standard +". Having replaced funds within 5 working days after the termination of "Christmas mood" deposit, the depositor will receive a +0.5% annual interest rate to the deposit "Standard".

"Piraeus Bank appreciates the loyalty of its customers. Therefore, we offer depositors who placed money on deposit "Christmas mood" the improved conditions of funds reallocating (+0.5% per annum to deposit in hryvna) for 3 and 6 months. Investors can receive the accrued interest monthly or at maturity of the deposit. The interest rate remains unchanged for the duration of the contract ", - Alexander Gnilenko, Piraeus Bank in Ukraine deputy director of retail banking department. 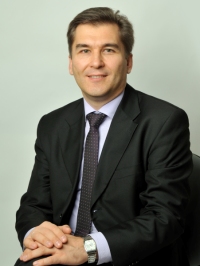 Alexander Gnilenko, Piraeus Bank in Ukraine deputy director of retail banking department: "Piraeus Bank offers the depositors who placed money on deposit "Christmas mood" the improved conditions of funds reallocating (+0.5% per annum to deposit in hryvna) for 3 and 6 months"

For three years consistently Piraeus Bank maintains the highest level of deposits’ reliability (grade "5") rated by an independent rating agency "Credit-Rating" (last updated on 28.12. 2011), which characterizes the bank's ability to return deposits fully and in time.

Piraeus Bank has the highest rating of deposits reliability provided by “Credit-Rating” Agency (grade “5”; last update took place on 07.12.2011), that shows the bank's capacity to make payments on existing deposits timely and in full. The Bank has «uaA» long-term credit rating with the forecast "stable" provided by “Credit-Rating” (updated on 22.12.2011). This long-term rating belongs to the group of investment ratings that is one of the highest ratings given to banks operating on the Ukrainian market.